I had always wanted to build a cosmic ray detector. A long time ago I experimented with Geiger–Müller tubes, but due to the low count rates (especially when using coincidence counting), the results were never satisfying.
I decided to build a pair of detectors based on PMTs (photo multipliers that will detect Cherenkov radiation in water, whenever a high-energy particle (muons in our case – the electron’s more massive brother), passes through it.

I bought 3 PMTs from ebay (specs on it here and here), pictured below: 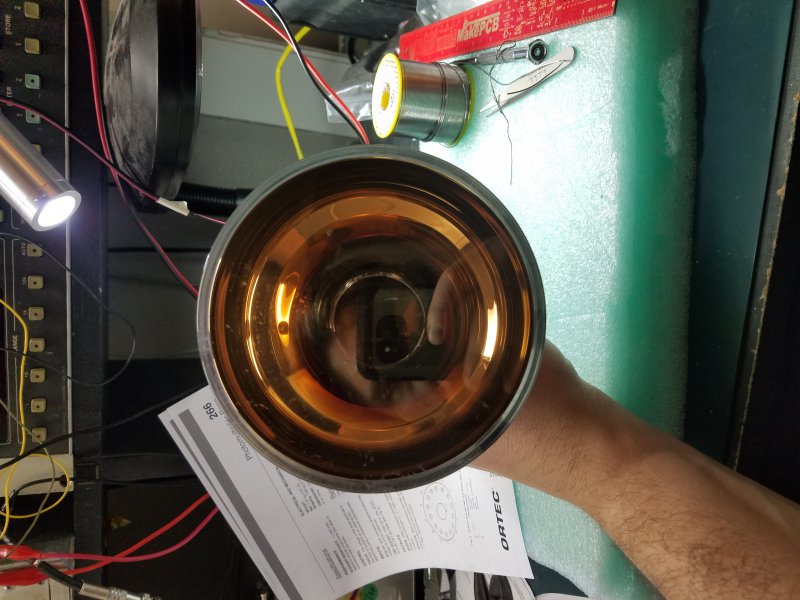 The next step was wiring up the pins on the PMTs. I used a simple resistive divider that provides an equal potential difference between all dynodes, and twice that potential between the cathode and the first dynode. Small capacitors were added between the last 4 dynode stages, to minimize voltage drop during pulses. This circuit is very similar to the circuit Ortec uses in one of their photomultiplier bases. 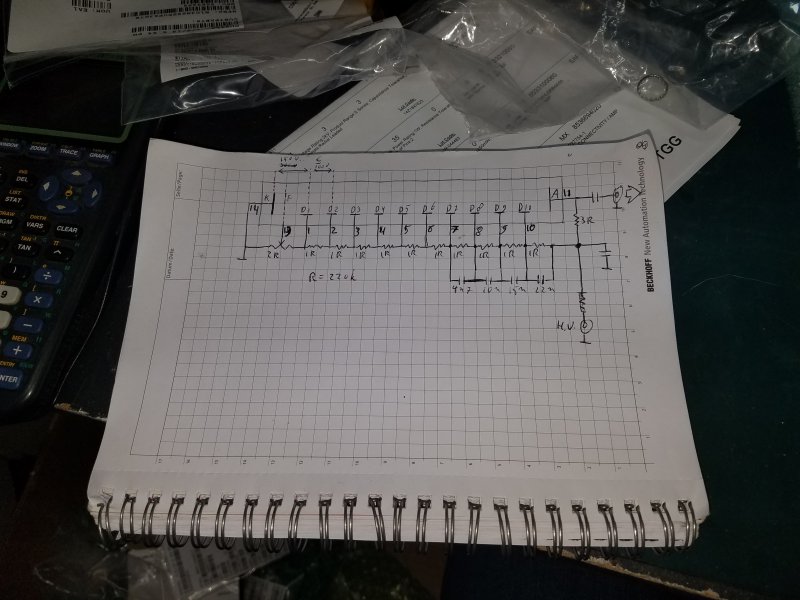 Schematic diagram of the divider circuit. 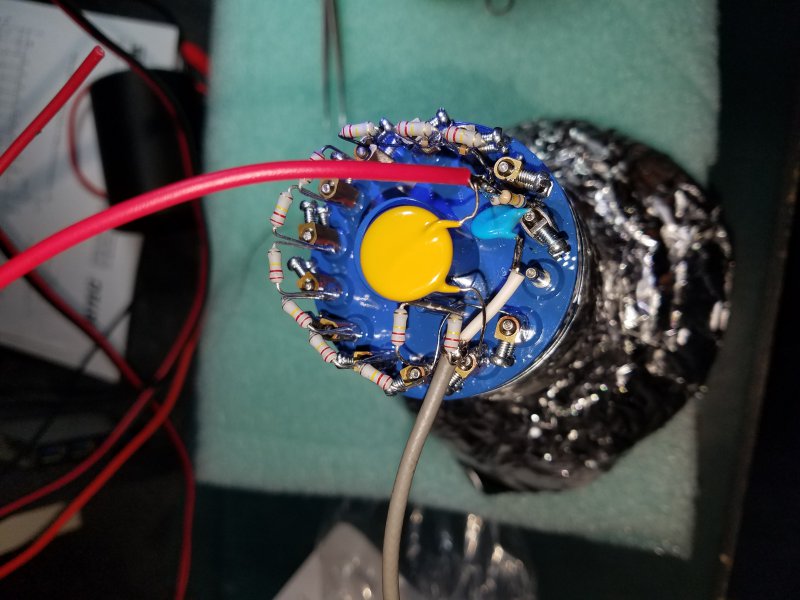 The circuit wired up to the base.

I ended up not using the potentiometer that was supposed to connect to the ‘grid’ or ‘focus’ electrode, since it turned out that this connection was internally connected to the first dynode.

The detectors will be housed in paint cans. 2 Paint can each: one containing the (distilled) water and the PMT ‘head’, while the other contains the wiring and most of the base of the PMT. The high voltage input, signal output BNC and a ‘gain’ potentiometer in series with the high voltage supply are added to a 1-gallon-paint can lid. 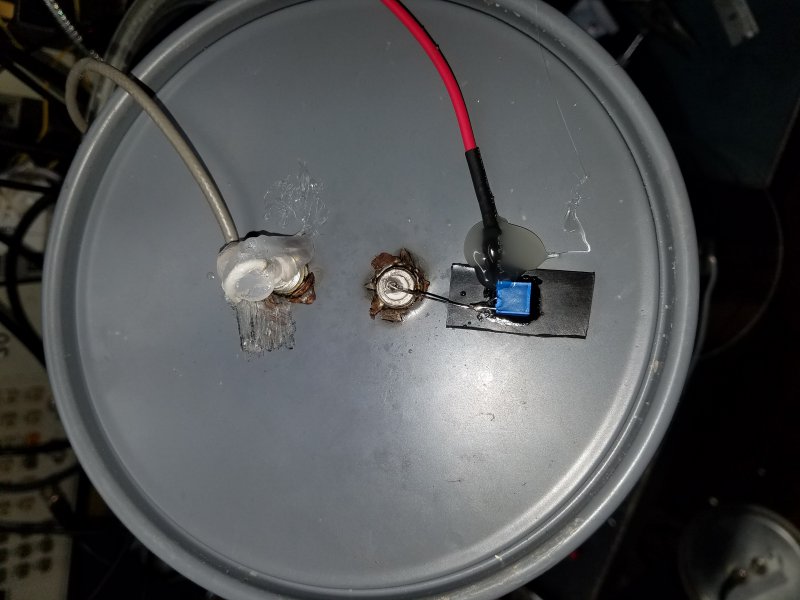 Connectors on pain can lid.

The inside of the paint can that will contain the water is lined with heavy duty aluminium foil, to provide some reflections that will (hopefully) guide most photons to eventually reach the photo cathode on the PMT. 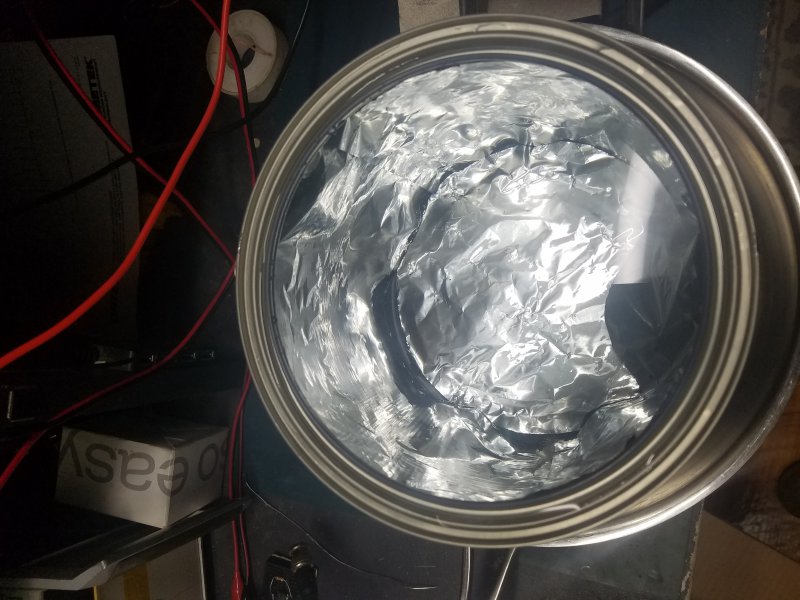 The bottom of the can containing the majority of the PMT and the wiring was removed using a can opener. Effectively turning it into a short tube. I then proceeded to create a water tight seal around the PMT head and the inside of the tube using hot glue. 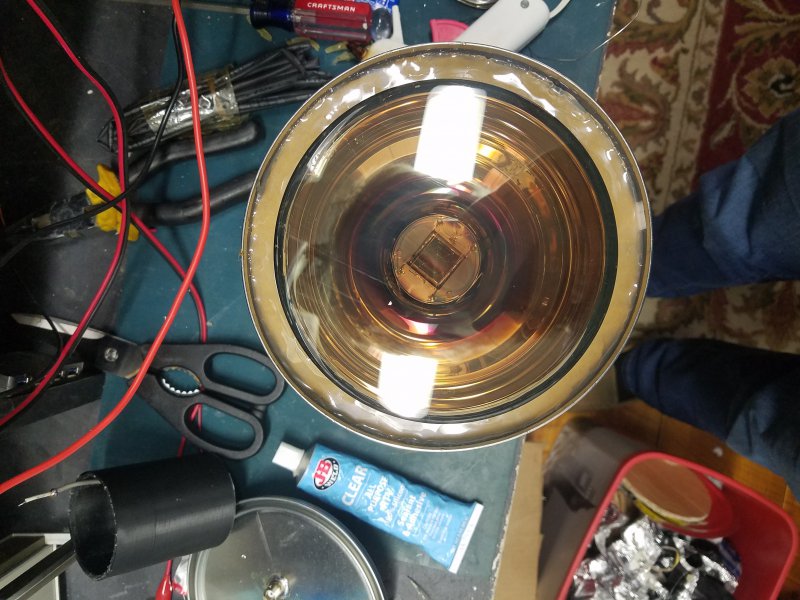 For rigidity, I added some foam to the PMT’s base, holding it in place. 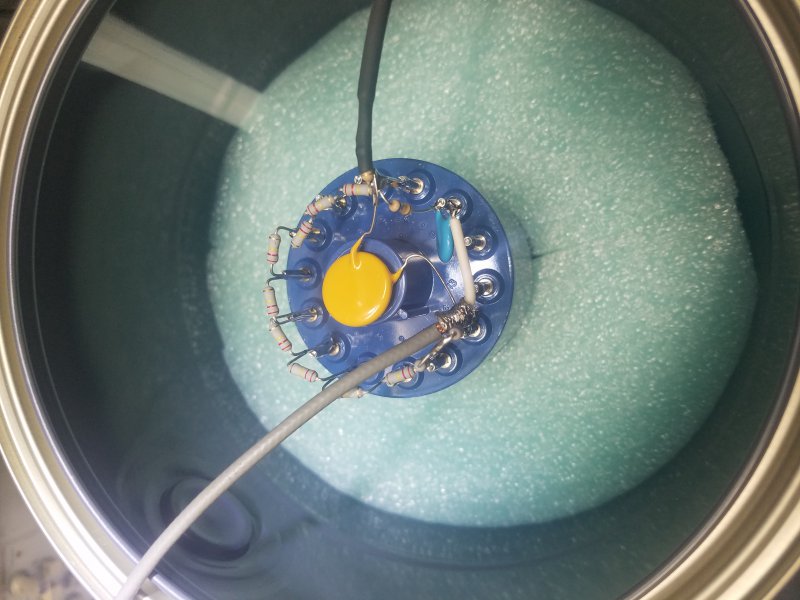 Then, for safety, I used a cheap (badly scented) candle to melt over the form. To make sure that, if the hot glue seal does leak, it will stay out of the high-voltage section. 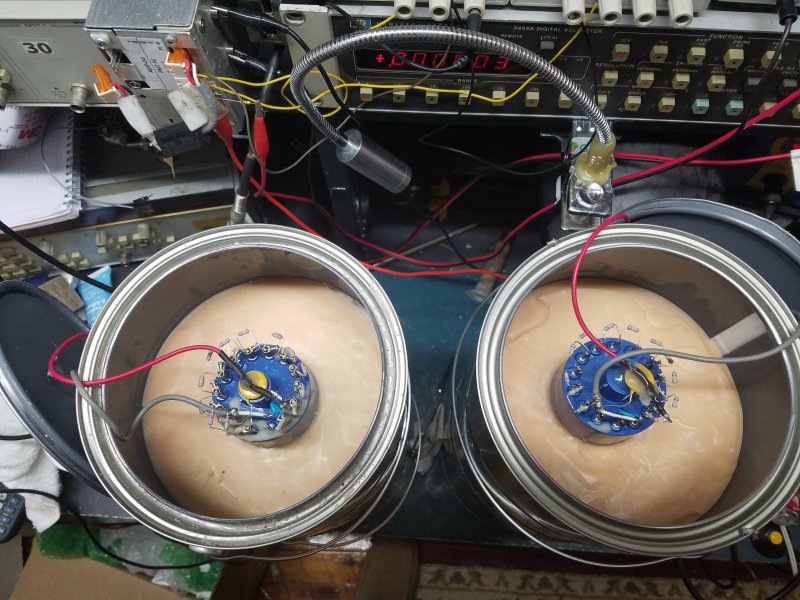 After having finished both detectors and connecting them to my oscilloscope, I finally got an ‘event’ where both detectors fired at almost exactly the same time. This is almost certainly caused by a muon passing through both detectors. It works! 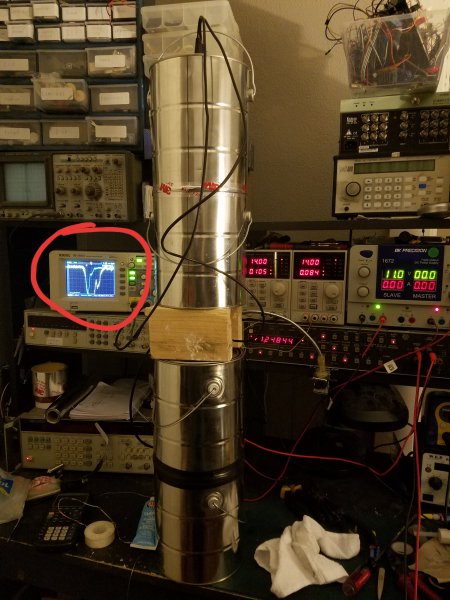 For a previous project involving Geiger–Müller tubes, I had bought a few old NIMs Nuclear Instrumentation Modules: a signal amplifier, a coincidence module and a zero crossing detector. All of these would come in pretty handy for this project. 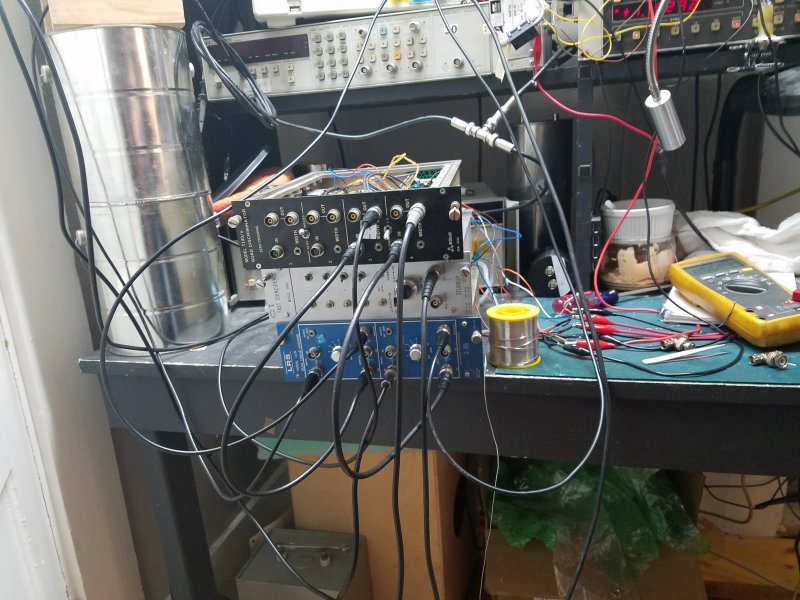 It turned out that the zero crossing detector required pulses with an amplitude of at least 200mv, which was much more than the signal that I had available, even after amplification. Therefore I modified the unit and simply replaced the circuitry of channels 3 and 4 with a simple comparator circuit, based on a pair of LM361 comparators I had laying around. I then dead-bug soldered them onto a scrap piece of PCB clad board. 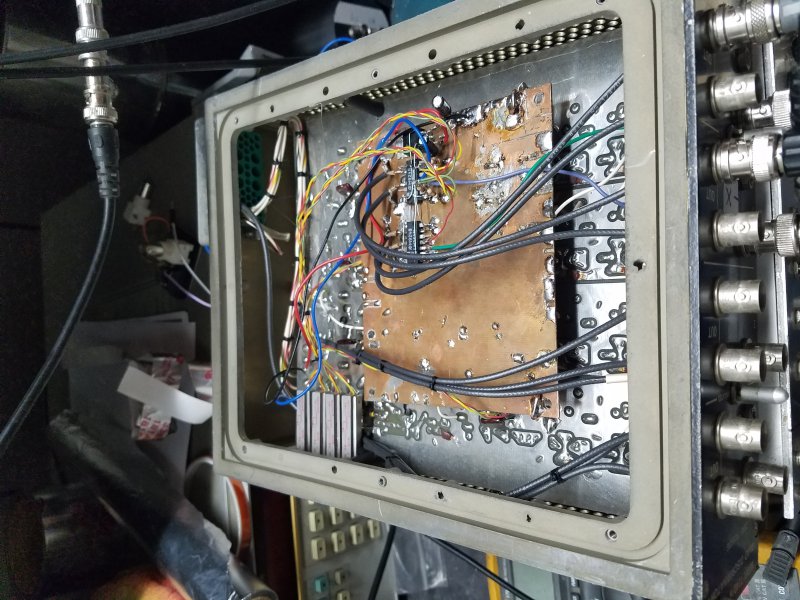 After wiring it up, everything worked as expected: the oscilloscope triggered only when both detectors actually fired ‘simultaneously’. 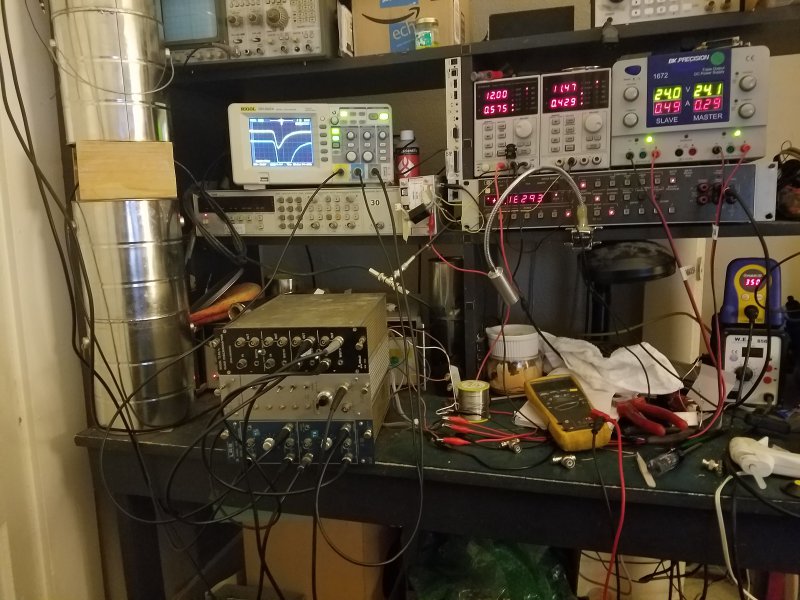 I then realized that I would get a big increase in count rate when using both detectors on top of each other horizontally. This obviously makes the detector a lot less selective when it comes to the angle of the particles, plus it increases the detection area somewhat. After running the detectors in the new orientation for a few minutes, I noticed that the high voltage had suddenly dropped from around 1200 volt to slightly above 600 volt. I immediately knew what happened. A LEAK!. The distilled water had made it’s way into the high voltage compartment of one of the detectors after all!

Even though only one of the detectors failed, I decided rebuilt both. This time I actually cut a circular hole, slightly larger than the PMT head, out of the paint can lid, having the PMT’s head protrude it for about an inch, and use a generous amount of silicone to seal the PMT and the lid to the can that contains the water. Turning it into one, hopefully watertight, unit.

The new and assembled detector stack now looks like this: 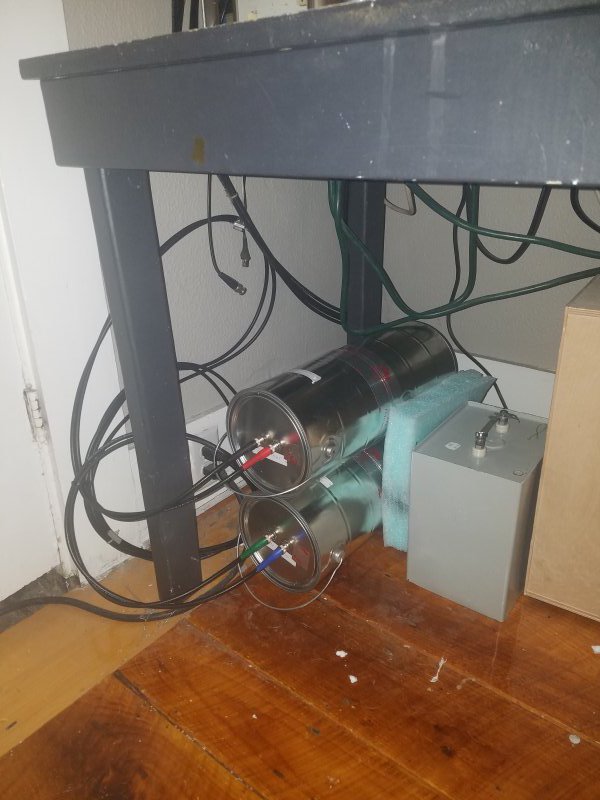 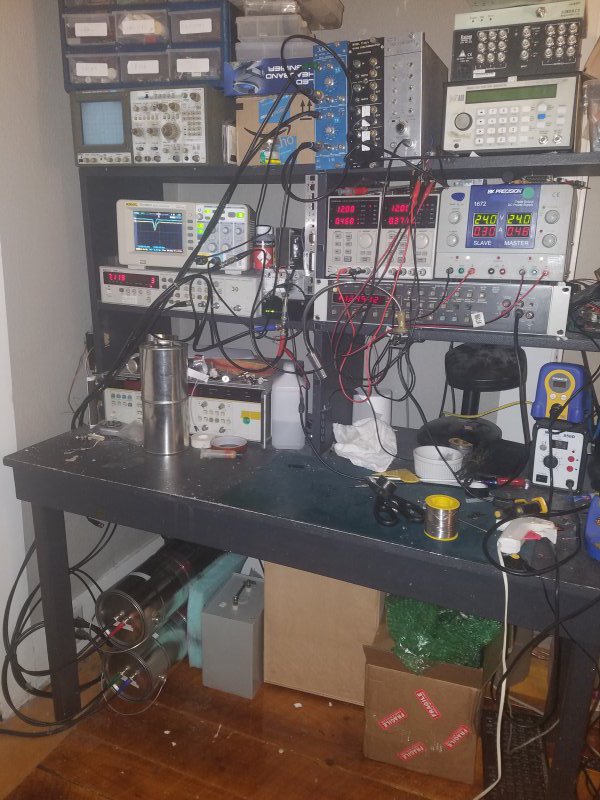 The next step will be to get a NIM-BIN (a unit to slide the NIM modules into, as well as to power them), some way of data acquisition (USB oscilloscope?) and some software to log all the data.

This entry was posted in Uncategorized. Bookmark the permalink.